Your true self is never lost

“Be yourself,” my mom would say to me when I was growing up. She knew that in my early teenage years I was tempted to try to be what others wanted me to be. But I wondered, What did it mean to “be yourself”? I wasn’t sure who “myself” really was!

While I struggled to find answers, I was beginning to glimpse a few spiritual ideas about my identity from reading the Bible and Science and Health with Key to the Scriptures by Mary Baker Eddy, which I did at home and in the Christian Science Sunday School. Many of the Bible figures, including young Samuel and Joseph, were good, honest, intelligent, and loving. And as they understood God to be a constant, loving presence, they were guided through difficulties and demonstrated something of their true, Godlike nature. I realized I could ask, “What does God know me to be?”

I really began to find an answer to that question as a college student living 3,000 miles away from home. I felt out of my element at this school, where the other students seemed more intellectually sophisticated and socially confident than I. I became doubtful about measuring up academically and wasn’t comfortable enough to make new friends.

A few weeks into the first semester, my English literature professor gave an assignment to write an original essay analyzing a literary work we were reading. The other students appeared to take this assignment in stride, but I had no idea how to begin and was too intimidated to ask for help. Blinded by fear and sure I would fail unless I wrote something insightful, I scoured the library stacks for anything about the author we were studying. Picking out several books, I skimmed them, jotted down notes, and transferred those ideas to “my” paper.

A voice in my conscience told me this wasn’t what the professor wanted. But relieved to have something to hand in, I pushed the doubt aside. When the professor returned our papers—with an “F” on mine and a note about borrowed material—I was abruptly awakened to the gravity of what I’d done.

Back at my dormitory, sobbing, I reached out to a Christian Science practitioner who had previously been of support and comfort to me. She listened patiently as I poured out my story. She didn’t judge or condemn, but gently supported a much-needed sorting-out process. Overwhelmed with a sense of failure and now remorse, I wondered how I could admit to what I’d done without risking greater exposure and shame. I felt lost.

As we talked, I sensed that the practitioner was looking past the surface of my human motives and actions, and discerning my spiritual, Godlike nature. This awoke in me a willingness to examine myself in this light, and the practitioner even made me laugh when she observed that I wasn’t very adept at cheating.

This comment helped me see how unnatural and wrong this behavior had been, and it stirred me to think more deeply about the fact that God, the only and wholly good creator, had made each of us in His, Spirit’s, image and likeness, as the Bible relates in the first chapter of Genesis and as Christ Jesus proved in his healing ministry.

Our true, spiritual self, the being who is God’s very own expression, can’t be separated from good and doesn’t include anything that isn’t good. As we read in the Bible, “Neither death, nor life, nor angels, nor principalities, nor powers, nor things present, nor things to come, nor height, nor depth, nor any other creature, shall be able to separate us from the love of God” (Romans 8:38, 39).

So what had happened? I’d been fooled into identifying with self-doubt as though it were an aspect of my nature. But my true being as the child or offspring of God—naturally endowed only with goodness—was completely Godlike. The feelings of inadequacy had come from a misunderstanding of who I am. Inadequacy had never actually been part of me and is never part of any of us, God’s perfectly complete creation. In cheating, I had not been acting in accord with the reality of my true being.

Although in that moment I didn’t fully comprehend my inherent spiritual and complete nature as the expression of God, good, the power of this truth began to permeate my consciousness. I saw there was no wiggle room for error, that we are all God’s perfect reflection, and that this meant I could demonstrate honesty, intelligence, forthrightness, goodness.

This insight, like the morning dawn, emerged gradually and irresistibly in my thought. The mesmerizing fear of not being able to measure up, and the sense that I needed to act dishonestly (that was engendered by this false view), began to lift.

Science and Health states, “Honesty is spiritual power” (p. 453). I felt this strength rising up within me. The clarity I was gaining about who man truly is, and our absolute ability to live in accord with this spiritual identity, brought with it the moral courage to face up to what I’d done.

My first step was to come clean with my professor. I called and asked to see him. I said I realized what I’d done was wrong, and made no excuses. He explained that I had violated the college’s code of conduct and could be expelled. Somehow the possibility of this extreme outcome hadn’t occurred to me, but I knew the most important thing right then was to act in accord with—to be true to—who I was as God’s likeness.

I felt deeply humbled by this opportunity to turn to God to learn more about what He knew me to be and to express qualities such as honesty and humility. Then, the professor said that he knew I’d learned a valuable lesson and recommended I stay in school.

As I walked back to my dorm, I was grateful to the professor for seeing and respecting my sincere desire to be honest and forthright. But more than this, I felt sobered by the huge spiritual lesson I had learned: My only identity is in how God made me—spiritual, with integrity, perfect.

The spiritual insights I gained from this experience, learning more about what it meant to “be myself,” supported me through the whole year as I continued to learn and grow. I excelled in a couple of classes, and several new friendships developed. Later, I felt impelled to return to my home state, where I graduated from a prestigious university. There, too, what I had learned enabled me to be a more contributing member of the campus community—including joining the Christian Science Organization (CSO). Bringing a standard of honesty and reliance on God strengthened both my academic work and the CSO’s efforts to bless the wider campus community.

So what does it mean to “be oneself”? I began to learn—and am still learning—that it starts with knowing who we are. We may sometimes feel inadequate, but Christ Jesus’ life showed what is possible for everyone to know and put into practice in our lives—that as the child of God, Spirit, we’re each endowed with Christly qualities and capacities that are the actual substance of all true being. Our Christlike nature means we include all we need within ourselves as God’s likeness, and this understanding impels us to be and do good.

When we define who we are on human performance or on what others think of us, we may not act in accord with our true nature; but when we are clear about our identity as God’s, Spirit’s, loved idea, we realize we have the courage and ability to be true to who we are, to what God naturally made us to be. 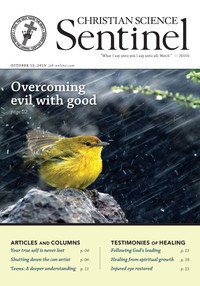