For seven years a recurring duodenal ulcer troubled me, and I developed an addiction to the drugs prescribed for ulcer treatment. Simultaneously, our teenage children were associating with individuals who used illegal drugs.

Christian Science interested me the first time I heard of it, which was very early in my marriage. The facts of the spirituality of true existence made an impression on me, but I did not feel I could relinquish medicine for myself or our children. So I drifted among several religious denominations and medical forms of treatment for quite a while.

The situation with our teenagers finally became critical, and I knew that only omnipotent God could save them. The turning point occurred at a Christian Science lecture, which our children attended with me. The lecturer emphasized the necessity of obeying God and loving one's fellow beings as oneself. Several examples of the results of such living were explained, and the children were receptive to these.

That night I knew a change was going on inside me. I was inspired and felt hopeful that we could be helped by God. I resolved to study the Bible Lesson (outlined in the Christian Science Quarterly) regularly and to attend a branch church. The question of whether to have medical treatment was still an issue, but I knew that gaining an understanding of God was the real need.

Daily my thought was turning more to the contemplation of how Spirit functions. Spirit is one of the seven synonyms for God given in Science and Health with Key to the Scriptures by Mary Baker Eddy. The book states, "Spirit diversifies, classifies, and individualizes all thoughts, which are as eternal as the Mind conceiving them; but the intelligence, existence, and continuity of all individuality remain in God, who is the divinely creative Principle thereof." This helped me gain a clearer realization of God's omniaction.

The dependency on drugs was by now really nagging me. Yet holding to the fact that God is always sustaining us greatly encouraged my next steps. I feared sleeplessness as a result of giving up drugs. Also, I worried about the possibility of dangerous ulcer recurrences if I did not use the medicine. These arguments were met confidently with fresh faith and joy in learning of our God-derived dominion over a material sense of being. One week the Golden Text in the Bible Lesson was from Proverbs: "Understanding is a wellspring of life unto him that hath it." Realizing the coincidence of understanding God and having a life worth living woke me up. So that's how it works! It was so wonderful learning of the spiritual laws that govern the real man—our true being. The displacing of false beliefs was beginning.

By the end of that day I knew that this was the life for me, and I wanted to get on with it. So what if sleepless nights resulted from coming off drugs? I'd use the extra time to study the Bible and Mrs. Eddy's writings.

That evening I began studying a number of pages in Science and Health. One sentence I read asks: "Who named drugs, and what made them good or bad for mortals, beneficial or injurious?" No sleepless night ever happened. There were no withdrawal symptoms. And I had a better, more restful sleep than I had ever had with drug use. No difficulties occurred when I resumed a normal diet. My healing was complete, and the ulcer never returned.

Back to the children. By now they were having quick healings of colds and sore throats with the prayer of a Christian Science practitioner who did much to support our spiritual progress. The children were attending Christian Science Sunday School while I attended branch church services. My husband, who did not take up the study of Christian Science, was also very supportive of the steps we were taking.

Very soon we moved to another state. Our children made new friends, who considered illegal drug use unacceptable. They had happy times and developed lofty goals, which they met. They have matured into drug-free, productive adults who contribute much good to their communities.

How good God has been to us. I could never express the depth of my gratitude for God's infinite love. My deepest joy was in being able to qualify for membership in the Church of Christ, Scientist. The divine Science Mrs. Eddy discovered really is the spiritual truth of being.

I am one of the children mentioned in the above testimony, and I can attest to the truthfulness of this account. 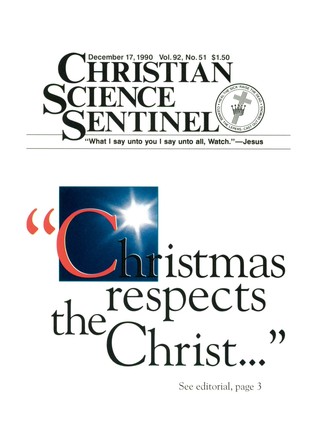 Looking up to Christ from down on your knees

Christmas: a message that goes beyond the holidays

How much can you pray about?

For seven years a recurring duodenal ulcer troubled me, and...

By Barbara B. Frucci with contributions from Laura E. Silman | December 1990

My sole desire in sharing this testimonial is to give encouragement...

I would like to express my gratitude for Christian Science and...

As a child I was a student in the Christian Science Sunday School...