In the Father’s hands

Who of us doesn’t want to feel the peace and comfort of knowing that we’re in good hands—that our family, our children, in fact everyone in the world, is in the best care possible? Well, divine Science, the Comforter Christ Jesus promised he would send the world—a Comforter that would be with us forever—reveals that we are always and only in the safe and loving hands of our omnipotent Father-Mother, God. In His, Her, care we can surely trust. In His, Her, hands we are safe from all sickness, and all oppression, fear, loneliness, and sin, which are not part of God’s good plan for His children. In the book of Isaiah, God speaks to us directly, saying: “Fear thou not; for I am with thee: be not dismayed; for I am thy God: I will strengthen thee; yea, I will help thee; yea, I will uphold thee with the right hand of my righteousness” (41:10).

What do we think, then, when we hear of someone falling into what appear to be the wrong hands—into the clutches of an individual or group that is a harmful influence, or harbors hatred or ill will toward others. In the last few months there have been many such reports in the news. For instance, the recently publicized case of a 17-year-old British boy whose family was heartbroken to discover he had left home and country to join up with a well-known terror organization. According to his parents, the organization targeted the teen online and “exploited” his “tender years and naivety,” and had carried out a “process of deliberate and calculated grooming of him” (“Britain’s youngest suicide bomber,” The Guardian, June 15, 2015).

In the Scriptures, we find comforting evidence that good can and does overcome evil.

In the Bible we read that Eve was similarly targeted to carry out the intentions of evil, symbolized in Genesis 3 by a talking serpent, which you could say “groomed” Eve with its smooth-talking rhetoric to do something utterly opposed to God’s will and ultimately harmful to her (see verses 1–6). Yet in these same Scriptures, we find comforting evidence that good can and does overcome evil. Shadrach, Meshach, and Abednego, three young Hebrew men, through their obedience to God, their trust in His power and goodness, and their deep faith that absolutely nothing could separate them from the one God they knew and worshipped, emerged from the fiery furnace without even the smell of smoke on them (see Daniel 3). And, of course, from the New Testament we have the example of Christ Jesus, who had such a full, complete understanding of his oneness with the Father and of the powerlessness and unreality of evil, that he healed sickness and overcame even death.

There have been many times when I’ve prayed deeply to be more alive to God’s power and allness. On one Sunday morning in particular I was also praying for reassurance that God’s children could not be led away from Him. Later, I headed over to church, where my Sunday School class—and an unexpected blessing—were waiting. In the first hymn of our opening exercises, above the adult voices, rose the sweet pure voices of the children united in singing, a cappella,

Father, we Thy loving children
Lift our hearts in joy today,
Knowing well that Thou wilt keep us
Ever in Thy blessed way.
Thou art Love and Thou art wisdom,
Thou art Life and Thou art All;
In Thy Spirit living, moving,
We shall neither faint nor fall.

The second verse of the hymn ends:

We would hear no other voices,
We would heed no other call;
Thou alone art good and gracious,
Thou our Mind and Thou our All.
(Elizabeth C. Adams, Christian Science Hymnal, No. 58, © CSBD)

In my prayers, I’ve found it immensely helpful to acknowledge and understand God as Mind—one of seven synonyms that Mary Baker Eddy, the Discoverer of Christian Science, uses to define God. Through a study of her textbook, Science and Health with Key to the Scriptures, we learn that this Mind, or “mind of Christ” as the Bible puts it (I Corinthians 2:16), is our Mind and the only Mind governing man and the universe.

To know God as the one Mind, and man as the reflection of Mind, is to understand that God is truly the only presence and power governing our children. It is to realize that no other power or intelligence exists that might impress or deceive our children, or lead them astray. It is to be conscious of the fact that every child possesses from divine Mind spiritual wisdom and discernment; therefore, he has the ability to reason and act rightly. We can pray to acknowledge that divine Principle guides our children’s footsteps and that “the law of his God is in his heart; none of his steps shall slide” (Psalms 37:31).

As God has created them, our children innately know God’s nature as only good, and they express this goodness in the qualities of mercy, love, charity, and peace. To know God as Mind is to feel the love of God, which dissolves fear and assures us that no one but God is nearest and dearest to our children, because the ideas of God love God, good, alone. Because of their spiritual oneness with God, He is with them wherever they are. His Christ, Truth, even now, is speaking to human consciousness.

Every one of us is fully equipped to recognize our Father-Mother’s voice, to hear and follow that voice. No one and no thing has the ability to take from God what belongs to Him, and Him alone. In a letter to one of her churches Mrs. Eddy wrote:“… this infinite Principle, with its universal manifestation, is all that really is or can be; hence God is our Shepherd. He guards, guides, feeds, and folds the sheep of His pasture; and their ears are attuned to His call. In the words of the loving disciple, ‘My sheep hear my voice, … and they follow me; … neither shall any man pluck them out of my hand’ ” (Miscellaneous Writings 1883–1896, pp. 150–151).

Years ago, at a very difficult time in my life, I lived with those words of Christ Jesus. As I began to grasp their significance, they were life buoys to me. At that time, I was engaged to a man I had met in graduate school whom I had dated for some months. As the wedding date approached, we met with the minister who was to marry us. He asked us specific questions about our past and what our hopes were for the future. Many other plans were set in motion for the wedding, and, on the surface, all appeared to be fine. Yet all the while I couldn’t shake the feeling that something was terribly wrong.

The ominous feeling only got stronger as the days passed. What was worse, I couldn’t identify why. I spoke to my fiancé about my reservations and asked him probing questions that I felt might dissolve my anxiety. But our conversations only left me more confused, and I began doubting my own ability to reason. Not knowing what more I could do humanly, I prayed deeply the next few months for guidance. I studied the Christian Science Bible Lessons daily and found needed inspiration in my growing understanding of God as Mind, my Mind, as I had learned in Christian Science. (This man had expressed an interest in Christian Science, had a copy of Science and Health, and told me he was praying, as well.)

My every thought felt like a prayer for God’s will to be done, whatever that might be. I recall very clearly the comfort I felt in knowing that despite the mental confusion, no one and nothing could take from me my peace of mind or interfere with the relationship that mattered most—my relationship to my divine Father.

Through a remarkable set of circumstances, less than two months before our wedding, I and other members of the family learned that this man had deceived me about any number of things, including what his real name was and the fact that he had children and a wife from whom he had been legally divorced only weeks earlier. I was living and working overseas at the time the deception was uncovered.

When confronted, the man never admitted to, or took responsibility for, his many lies and for what he had neglected to tell me about himself. In fact, he suggested that someone must be feeding me wrong information. Yet, it was crystal clear by then that the truth had come out and I had been saved from making a terrible mistake. This never became so evident as when someone who knew this man well said that only God could have saved me from that marriage.

This was powerful proof to me that no one, and no circumstance, is beyond God’s help and omnipotent reach because there is nothing outside of God and His harmonious universe. All of us are held safely in this universe, in the Father’s loving, protective hands. Even a glimpse of this can and will save us. What comforting news! 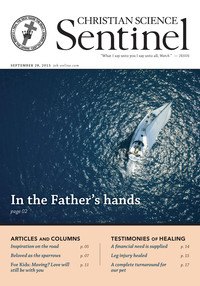