The zeal that heals

Popular thought tells us to follow our passion. Yet, it’s easy to be passionately wrong! We can fall head over heels for someone who turns out to be a complete mismatch, fixate on one side of a political question that has a thousand nuances, or be so convinced of our religion’s rightness that we commit all kinds of wrong in order to force it on others.

A Bible story (see Acts 9:1–20) exemplifies the latter. Saul, a zealous Jew, passionately persecuted fellow Jews who followed the teachings of Jesus. Yet, Saul’s heart must have been primed to live the life of healing-not-hating espoused by the early Christians he hounded, because that’s what happened. Startled by a spiritual vision that opened his eyes to the wrongness of his self-righteous actions, he lost his sight, until a Christian named Ananias opened his eyes not just physically, but also spiritually—to the power of Christ—and he literally saw anew. 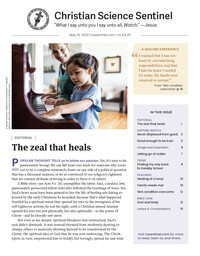