Making sure your vote counts

It must have been a remarkable moment. No campaigning, no long lines or voting booths, no exit polls. Instead, as a large group gathered to cast their votes for one of two candidates, personal opinion gave place to prayer.

The book of Acts in the Bible tells the story of the 11 apostles along with more than one hundred other followers of Jesus gathering to elect a replacement for Judas Iscariot: “And they appointed two, Joseph called Barsabas, who was surnamed Justus, and Matthias. And they prayed, and said, Thou, Lord, which knowest the hearts of all men, shew whether of these two thou hast chosen, that he may take part of this ministry and apostleship. . . . And they gave forth their lots; and the lot fell upon Matthias; and he was numbered with the eleven apostles” (1:23–26). 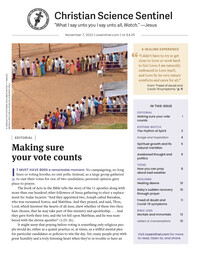