"Forgive us our debts, as we forgive our debtors" (Matt. 6:12). Before becoming a student of Christian Science I understood this verse from the Lord's Prayer merely to mean that as I forgave people who were thoughtless or unkind to me, God would forgive my thoughtless or unkind deeds. Early in my study of this Science I read an article in the Sentinel on criticism and its relationship to healing. Then I realized that true and loving forgiveness meant beholding others as God, Spirit, creates them—perfect and innocent. I could see, too, that this acknowledgment or beholding of the other person's perfection and innocency would, in turn, help to free me, forgive me, of the sense of sin. In other words, we don't really comprehend our own perfect selfhood if we believe in imperfection in others.

The following year I had an experience which proved to me that we are forgiven as we forgive. I attended summer school with other teachers. In order to avoid reading the assigned references, several of the teachers began asking to copy my notes. After a week or so I became resentful at what appeared to be lack of integrity on the part of people I felt should be upholding high standards of honesty.

Send a comment to the editors
NEXT IN THIS ISSUE
Testimony of Healing
Looking back on my life to see evidence of spiritual progress,... 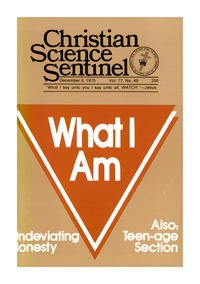