In Science and Health, Mrs. Eddy...

In Science and Health, Mrs. Eddy writes (p. 22), "Security for the claims of harmonious and eternal being is found only in divine Science." I can vouch for this fact, for I never felt secure until, after many trials, I finally caught a glimpse of the fact that there is absolutely no error in Truth. This followed an intense and earnest study of the Bible and of Mrs. Eddy's writings and was enhanced by the reading of several books about our Leader published by The Christian Science Publishing Society.

When I was a child, my mother began the study of Science after reading a lecture on it printed in The Christian Science Monitor. Soon after, through the prayers of a practitioner, I was healed of asthma and nightmares. Traits such as a feeling of insecurity, an anxious outlook, and self-will took much longer to overcome because I was convinced that these were a part of my nature. I have been helped in finding employment at different times and have had healings of scarlet fever, skin conditions, a strained singing voice, the effects of sunburn, inharmony in the home, and the fear of physical harm.

Send a comment to the editors
NEXT IN THIS ISSUE
Testimony of Healing
I have for a long time had a... 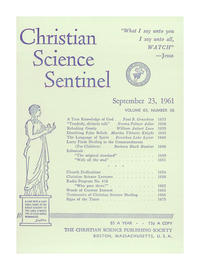