In a letter published in your paper of the 17th inst., a writer criticizes Christian Science for its teaching that man is created in God's image and likeness, as stated in the first chapter of Genesis, and for its denial of the "fall of man" as a scientific fact.

As a Bible student our critic should know that the book of Genesis gives two distinct and contrary accounts of creation. The first chapter, and the first five verses of the second, depict a perfect unchangeable creator who, out of His own unchageable perfection, brought forth a perfect universe and perfect man. The Scripture not only states but emphasizes the fact that man was made in God's image and likeness and, as such, is as incapable of falling as his creator—otherwise, the image is lost and becomes, in fact, no image. the second account is the history of mortality and of what Christian Science terms "mortal man." This creation is the exact opposite or counterfeit of the former, beginning with matter or dust, and bringing forth the fruits of sin and death. In this mortal account the creator, instead of being the Elohim of the first chapter, is now Jehovah or "Lord God," which was the ancient Jewish conception of God who, at times, appeared to be far from unchanging. Thus Christian Science teaches that mortal existence, from its seeming inception, is based upon a finite, mortal concept of God, and therefore cannot be real in any scientific sense. In spite of all the evidence of the mortal senses the real man, as the image and likeness of God, remains to be discerned and demonstrated. As the veil of mortal belief and superstition is lifted from human consciousness through the spiritual perception and understanding of God and His spiritual creation the manifestations of mortality, such as sin, disease, poverty, hatred, and death, lose their seeming reality and disappear. It was this spiritual understanding which healed the sick and sinning in the time of Jesus and for about three centuries thereafter, and which is doing the same to-day through the ministrations of Christian Science. In the face of this it is futile to quibble as to the application of the word "image." Christian Science rests upon demonstration, and its fruits stand to witness whether or not it be of God.

Send a comment to the editors
NEXT IN THIS ISSUE
Article
"Does a Jew cease to be a Jew, religiously speaking, when... 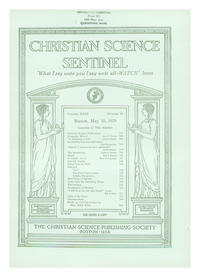