The children of Israel journeyed in the wilderness between Egypt and Canaan. In the Bible story the terms Egypt and Canaan symbolize bondage and spiritual freedom. The passage from one to the other meant deliverance and fulfilment of the divine purpose. The people were led without delay to the border of the promised land, then the spies were sent to learn the conditions. All agreed that it was a rich land, "flowing with milk and honey; but a majority said that they could not take it, that walled cities and giants were in the way, and the obstacles were too great for them. At this report a great fear fell on the people. The leadership of Moses was rejected, Joshua and Caleb were stoned, and the question was raised whether it would not be better for them to return to Egypt. This action proved the people unworthy, and so they were disciplined forty years in the wilderness, until a more loyal generation appeared, who made the conquest. The craven-hearted never yet won a promised land.

In this story common currents of mortal experience appear, and there is also revealed the power which comes to men through obedience. Why should these people decide to return into Egypt? A fleshly appetite still clamored, and they were not equal to the increasing demands of Spirit. When they were given "bread from heaven," they said, "Our soul loatheth this light bread." "We remember the fish, which we did eat in Egypt freely; ... the onions, and the garlic: but now ... there is nothing at all, beside this manna." Such language indicates a reversion to the flesh through the demands of appetite. The spiritual purpose of the journey is lost. It is the old danger that shadows the journey of life,—error tries to defeat truth, belief in matter to clog spiritual unfoldment, false appetite to destroy pure aspiration. In Christian Science we get the victory over fleshly desire by annulment. This desire is not in divine Mind or in its manifestation, which is the sum of being, hence it is false and its pleasure is illusion. This fact must be learned either by suffering or by Science. It came to the Israelites after long discipline, but now "he that runs may read" and not turn back to bondage. 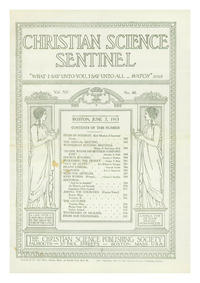