MRS. EDDY has declared that "in Science, you can have no power opposed to God, and the physical senses must give up their false testimony. Your influence for good depends upon the weight you throw into the right scale. The good you do and embody gives you the only power obtainable. Evil is not power" (Science and Health, p. 192). The belief in personal evil alias an evil personality is therefore just as unscientific as the belief in personal good alias a good personality. Said the Master, "Why callest thou me good? there is none good but one, that is, God." Again, when in the wilderness, under the severest temptation that ever befell any one, Jesus refused to admit the reality of evil as either power or personality.

The belief in a person or a power apart from God, immediately separates the believer from God. Whatever separates man from his brother separates man from God, and whatever separates man from God separates man from his brother, that which separates always being a belief in the reality of the unreal. This attitude toward all evil must have been contemplated in the teaching of him who said, "When thou prayest, enter into thy closet, and ... shut thy door;" especially since he left no directions for opening the door or coming out of the closet again, and the apostolic command is to pray without ceasing. The condition precedent to entrance into such a state of consciousness is an all-absorbing motive for absolute obedience to the commandments. As in ancient time, the demand for absolute obedience to the commandments is manifested to material sense as the fearful thunderings and lightnings on Sinai; and the tendency of faithless mortals, like the children of Israel of old, is to remove and stand afar off, to view the demand with awe. 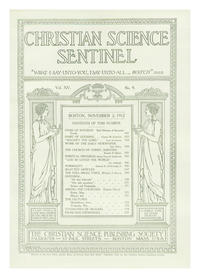