At a meeting of First Church of Christ, Scientist, New York City, held in the church edifice, April 19, 1907, Edwin F. Hetfield, First Reader, presiding, it was moved by Mr. Hayne Davis, and "unanimously voted, that Mrs. Augusta E. Stetson be requested to ascertain whether it would be agreeable to our beloved Leader, Reverend Mary Baker G. Eddy, the Discoverer and Founder of Christian Science, to permit this church to supply the sum necessary ($1,000) to provide for her a membership in the Association for International Conciliation on its highest plane of membership, that is, a member 'Fondateur,' and if so, that the appropriate action be taken to complete the membership."

The First Reader, in addressing the meeting, called attention to the relation of Christian Science to the world-wide movement for permanent peace, and particularly to the National Arbitration and Peace Congress which had just been held in New York and in which members of First Church had taken active part. He gave full meed of recognition to Mrs. Eddy's work for universal peace, as did also Mr. Davis, who was called upon by Mrs. Stetson to address the meeting. 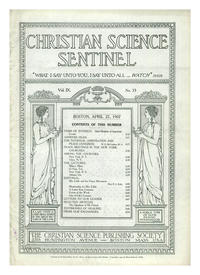