with contributions from Beecher, Humphry Davy

The most largely attended Wednesday evening meeting in the history of Christian Science in this city was held last night [June 25] in Christian Science Hall, the seating capacity being far from sufficient to accommodate those desirous of attending. Many testimonies of healing through the power of God, sought in prayer, were given by visitors from this and foreign lands.

Dr. F. J. Fluno of Oakland, Cal., formerly an eminent physician of the Pacific coast, a member of the Christian Science Board of Lectureship and leader of the work in Oakland, told of the wonderful progress of the movement in California and the far West. They had recently completed a beautiful church edifice in his city, which was the direct result of the healing work there. He said that he felt that his fifteen years and more of active practice in this healing religion justified his confidence in its efficacy as a curative agency. 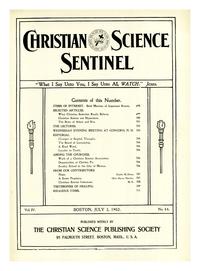